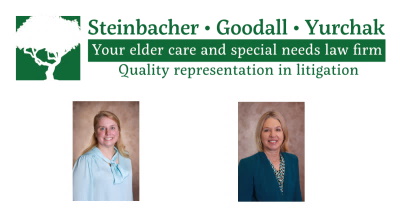 Attorneys Julie Steinbacher, CELA®, LLM, and Kathleen Yurchak have both been named to the 2022 Pennsylvania Business Central Top 100 People list. This annual list is published each January, and it recognizes 100 people representing various organizations from throughout Pennsylvania Business Central's 23-county footprint, which includes both Lycoming and Centre Counties, where two of Steinbacher, Goodall & Yurchak's four offices are located. The list highlights the vibrant economic and social life of central Pennsylvania by honoring the people who make it happen.

While the 2021 edition marks the second straight year that both Julie and Amos have been named to the list, both have now been honored on this list more than twice. This year marks Julie's fifth time on the Top 100 People list, and her third straight. In addition to 2020 and 2021, she was also named to the list in both 2016 and 2018. The founding shareholder of Steinbacher, Goodall & Yurchak, Julie is Certified as an Elder Law Attorney (CELA) by the National Elder Law Foundation, has a "superb" AVVO rating for attorneys and has been named a Super Lawyer® for the last two straight years in Thomson Reuters' annual listing of the same name. Julie has lectured extensively for several organizations including the Elder Law Institute, Pennsylvania Institute of Certified Public Accountants and many more, and is also the president of Estate & Long Term Care Planning, Inc. She has also authored several books in a Protect Your Family series that informs people about planning for the second half of life. Julie, along with Attorney Jenna Franks, co-published the 2021 Supplement to the Pennsylvania Trust Guide, which was published by the George T. Bisel Company, Inc. Julie is also a fellow of the American College of Trust and Estate Counsel (ACTEC), as she and Attorney Amos Goodall are two of only as two of only 98 attorneys in Pennsylvania to be ACTEC fellows, and two of only five in the northeast and north central region of Pennsylvania ranging from the Poconos and west beyond State College. Julie also recently attained her LLM degree in elder law and estate planning. An LLM is Master of Law degree, and a graduate qualification in the field of law. It was created for attorneys to further expand their knowledge or study a specialized area of law. See Julie's Top 100 People profile.

This marks the first time that Kathleen has been included on the Top 100 People list. Kathleen has been practicing law in the State College area since the 1980s, and prior to joining Attorney Amos Goodall to form the law firm of Goodall & Yurchak, which was later acquired by Attorney Steinbacher to form the current law firm, Kathleen worked at one of the nation's premier litigation firms. She has more than 25 years of experience handling high-profile trial work in state and federal courts across the nation, and has acted as counsel in areas such as employment disputes, Title IX complaints, breach of contracts, defamation, product liability, bankruptcy and trus­tee issues, insurance coverage, will disputes and removal of trustees and executors, partnership disputes and many more. Kathleen has served as the Treasurer for the Centre County Bar Association, is a member of Pennsylvania Association for Justice, a member of the Federal Bar Association and its civil rights committee. In addition to her litigation work, Kathleen primarily handles estate administration for the law firm. Recognizing the need for community activity, Kathleen has dedicated time and effort for pro bono organizations. For example, she has filed amicus briefs in both the United States Court of Appeals for the District of Columbia Circuit and the Third Circuit. In recognition of her distinguished record as a trial lawyer, she has been called upon to be a principal speaker in training seminars and for continuing legal education courses. She is admitted to practice before the Bars of the United States Court of Appeals for the Third Circuit, the United States District Court for Eastern, Middle and Western Districts of Pennsylvania.  See Kathleen's Top 100 People profile.

Pennsylvania Business Central is the premier business-to-business publication in central Pennsylvania and is distributed over a 23-county area to over 40,000 readers. Each year, the publication receives a long list of nominations for the Top 100 people list from its readers, business executives, chambers of commerce, community leaders and others in order to identify the most dynamic and consequential nominees. See the entire Top 100 People of 2022 list.